Manos Moschopoulos is one of the driving forces behind the Belgrade Bid for the European Universities Debating Championships 2012. He reflects on the bidding process, the bid, and the Opens Belgrade has organised over the past two years.

Somewhere around Newcastle Euros, I was sitting with Kimon Ioannides, Milan Vignjevic and Marko Cirovic when we came up with the idea of a Belgrade Euros. At the time, we had no idea what it took to run the tournament; it just seemed like a genuinely good idea. Our instincts, two years later, are probably proven right as the University of Belgrade and the Open Communication Debating Network have put together a very strong bid to host the next round of the European University Debating Championships.

We worked on the idea, made our initial calculations and saw that hosting Euros was quite realistic. But we had to prove ourselves, which we first attempted to do with the Belgrade Open in 2010. The tournament was a fantastic affair, with various participants leaving us signed post-its that read “bid for Euros!” as souvenirs, an experience was only topped by the next Open in 2011.

The people in Belgrade have shown they have what it takes to pull of a large debating tournament. The Belgrade Open is one of the most-talked about tournaments on the continent with a number of people telling us that it was the best competition that they have ever attended. For all of us on the inside, it was a huge undertaking that saw Milan Vignjevic and Milan Krstanovic, convenor and tournament director respectively, put in a lot of good work and coordinating the sizeable local community that dedicated it’s efforts to put together what was one of the largest competitions ever to be held on the Continent.

That tournament’s success can be attributed to two factors. On the one hand, the excellent institutional links that Open Communication has built over the years, which has seen the National Assembly host every final of the Belgrade Open – a remarkable fact is that the first event to be hosted in the building after Milosevic’s downfall led to democracy was a Belgrade Open final. The City of Belgrade, the central government and other public institutions have lent their support, material and otherwise, to university debating in Serbia for the past decade, recognizing the importance of debating in building an open, democratic and peaceful society.

The other factor is surely the fact that the debating network has grown over the years to now encompass hundreds of debaters and alumni that come back and help train and recruit new students in a number of faculties, city centres and universities across the country. The last two Belgrade Opens had enough volunteers to rival the capacity of a Worlds tournament – to the point that in 2010, when I was running the tournament alongside Jovana Mitic, Nebojsa Kolundzic told me we could assign a volunteer to each team and still have enough to do the rest of the tournament. We had 52 teams that year. 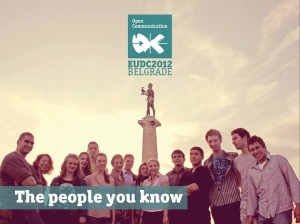 It is also worth noting that everyone on the Belgrade Euros 2012 bid committee, which will hopefully be the organizing committee after the vote in Galway, have been involved in the organization of the Belgrade Open in the past and have participated in Euros or Worlds in the past, while a number of them have also managed to break at those two competitions as well as dozens of Opens and IVs across Europe. The team reflects everything the Serbian BP community can be proud of: commitment to debating, competitive success, organizational skill and, overall, a lot of experience at the task they’re asking the European community to trust them with.

But hosting Euros in Belgrade isn’t only a guarantee for a successful tournament. It would mean that the tournament will move to the heart of a region that’s on the long, but steady, way towards European integration. Debating programs in the Balkans are far from being mere co-curricular clubs aimed at their members’ recreation, they are important elements of the integration process. It is no coincidence that the Organization for Security and Cooperation in Europe has included the Belgrade Open and the Serbia Summer Debate Academy in their democratization agenda for a number of years. Euros would no doubt serve as a flagship event to attract more people to debating, as well as the media attention that would in turn strengthen the commitment of institutional and commercial sponsors to the activity.

It would also enable the countries in the region to participate in Euros, due to the fact that train and bus travel in the Balkans are extremely cheap. A Belgrade Euros would be accessible for teams and judges from countries such as Bosnia & Herzegovina, Macedonia and Montenegro, which have a long history of schools debating supported by IDEA and other donors and their alumni are trying to set up university debating circuits that would bring them into the debating family we belong to. It would also mean that dozens of students will get experience in adjudication alongside the best that the European pool has to offer, an experience they will be then able to transmit as trainers in existing and new debating societies in their area.

To that end, we are very proud of Adjudication team we managed to put together. Our CA, Art Ward, is known not only for his judging skill but also as one of the most hard-working and loved characters on the IONA circuit. A few weeks after we confirmed him as CA of our bid, DLSU Worlds 2012 chose him as their DCA, solid proof of his capacity. With him, Stephen, Isa, Ben and Filip do not really need a long introduction – they’ve been CAing and DCAing most competitions around for quite some time now, providing the bid with a lot of experience in motion setting, managing adjudication pools and input on how great tournaments are run.

I’m sure Belgrade Euros will be a massive experience for the participants that will also leave a lasting impact on the host debating circuit and the region around it. I hope that you agree with me and we spend August 2012 in Belgrade, enjoying a great tournament in, as CNN Traveller put it, “a city where you can dance until sunrise seven nights a week, where hospitality crackles in the air, and where looking good is a birthright and a religion in one.”

Editor’s note: The Bid for Leeds EUDC 2012 was also invited to contribute an article to SevenTwenty. Keep following us for more updates!