Ary Ferreira da Cunha, president of the Socieda de Debates da Universidade do Porto, the first debating society of Portugal, shows us how his journey started one year ago.

My story, our story, on how we started debating in Portugal really doesn’t matter for itself. There’s nothing out of the ordinary in it, and that’s precisely why it might be important.

It all feels like long time ago, but it was just three years ago, in March 2008 that I sat down with half a dozen friends from the University of Porto Law 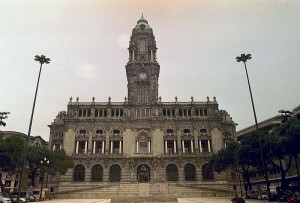 School’s (Portugal) at the Faculty’s bar and told them about starting a debate club in our Faculty. We didn’t have a clear idea of what we would be doing, but we sensed a lot of energy and ideas in the air at a time. It felt right to create a place for future lawyers to come and learn from each other about how to convey big ideas over big issues in persuasive terms.

We were alone. There was no debate in Portugal: not in BP, not in any other format, not in university, not in high school. Almost no one knew about debating: not the students, not the parents, not the professors, not the sponsors.

It all sounded huge. Many told us that it wouldn’t work: “You know that people only care about studying, or partying. No one cares”. But, with some effort, friends brought their friends and soon we had our first debate, and then a second. People kept saying that “[almost] no one cares” but eventually, with some more effort, we were doing it every week, holding a championship and organising events for 200 participants.

People kept saying “[outside the Law School] no one cares”. But, a few months after we started, a group in the Economics Faculty decided to finally get a similar project on the road. We organised some activities together, they organised a championship of their own and in a year’s time we thought it would be nice to launch a project for the whole University of Porto, starting the following academic year (2010/2011).

They warned us again: “[outside social sciences] no one cares”. But, with some effort, in a few months we had organised debates in nine different Faculties and had people from almost every Faculty actively enrolled in the project, we were participating in international tournaments and organising the International Debate Camp, an unique summer school that gathered great debaters and trainers from around Europe for a week of “learning, sharing, competing” and we went to Galway Euros and competed in the EU-China Youth Debate Tournament, where we broke for the first time.

This year we are not alone. We’ll be having five debating societies operating in Portuguese universities, debating will be a reality in at least eight high schools in Porto and our alumni are trying to create debating societies in Brazil and East Timor. More than that, we feel part of a network of European and global debaters. Great, fun, inspiring and smart people that organise wonderful events for each other, people who like to know and to learn things;who like to talk and to listen.

I will not lie to you: implementing a debating society was and is incredibly hard. We fight intolerance, indifference, ignorance and fear of various kinds. We swim against a culture of cynicism where standing-up, participating, is regarded with suspicion and attacked with sarcasm. We face an economical melt-down where public and private sponsoring is very difficult; where demotivated students have to work, to help their parents  even more or to study even harder because they cannot allow themselves to spend an extra year at college.

I was very fortunate to find incredible people, full of energy, passion and talent; people powered up with the will to make sacrifices in their personal and academic life in order to keep making this come true.

Yes, they were right on that: some people do not care, most people do not care. You will probably find out that statistically those who do care represent an insignificant percentage of the all students population. If that bugs you, do it for the people that do care: do it for all those smart students in your university that are eager to find a place to learn how to think and talk clearly, empower an educated elite with the tools to make a difference in your campus, in your city, in your country, in the world.

A. When people debate, or even just listen to a debate, they have to think about local and global subjects, they learn about important issues of the world around them, and when you know it’s hard to keep unengaged. B. When we debate we are playing a part of an extremely engaged person and that masks tend to glue to the face. It’s extremely hard to say “you should care” and explaining why “you should care” every single week and going home not caring a bit. C. When you start doing a new activity you look for role-models among the people who do the same as you but better. And so many debaters have no option but to look at some real-life debaters as role-models, people who are extremely engaged in public life. D. Debaters can see both sides of the motion, but that doesn’t mean that they are not able to pick sides or that they don’t care. Most debaters I have met care a lot and they have the skill and knowledge to tell other people they should care as well. E. Debaters have an infectious “caring effect” that goes beyond the debating community and spreads to the other networks they function in. As usually they are also fairly well connected people the potential of debating as a tool for civic engagement is huge.

Andy Warhol once said: “They always say that time changes things, but you actually have to change them yourself”. There’s nothing extraordinary here. Just a few people, that turned into a few hundred people, trying to promote debate as a way to make a difference in their community. It happened before, it is happening now and maybe you can make it happen, in your way, in a near future. That would be extraordinary.

Margaret Mead: “Never doubt that a small group of thoughtful, commited citizens can change the world. Indeed, it is the only thing that has”

Very nice story! I’m glad to hear debating is starting up in Portugal! I’m also glad to tell you it is starting in Austria as well! We are looking forward to your first IVs and Opens!

Great work here. Truly inspirational. Keep up the good work and I am sure our paths will cross.

As always, am inspired by the work you guys have accomplished in such a short period of time! I love all the crossroads we’ve met at thus far, and I look forward to working together in the future. Hope to see you at Budapest Open in March 2012 – we are working on spreading debate in Hungary, so we need all the international help we can get!

Just what we are trying to set up in Copenhagen. So nice to hear an account of a relatively new society with such great success. Really inspiring. With some luck and a lot of hard work I hope that Copenhagen Union can grow and inspire in the same degree as you have been able to in Portugal.