When the chair of our octofinal against Australia came up to deliver her verdict, we were pretty sure what she was going to say. Our journey to Antalya World Schools 2013, which started at the DSDC 2012 in March, would end. 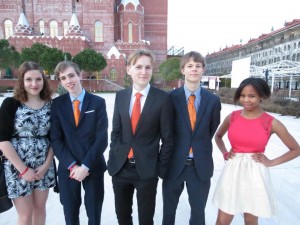 For months, seven young debaters have spent their Saturdays mastering the art of debate. Guided by many coaches, they grew before the eyes of our whole community. Four of them – Roel Becker, Amy Bakx, Uche Odikanwa and Joris Broeders – were selected for Team Netherlands 2013.
Like every year, World Schools (WSDC) is a debating event like no other, mostly because of the diversity of those who attend. Ambitious high school students, avid student debaters, schoolteachers who coach, graying men who have attended for decades: all of these groups come together at WSDC. Their experience with debating varies. The members of Team England have had years of training and were carefully selected, while Team Hungary had never debated before participating.
This tournament saw the rise of Team Swaziland, which only competed for the second time and reached the Grand Final. It shows that schools debating is still in a stage where anything can happen. This is also reflected in the judging at the tournament, which ranges from lower to the highest quality and represents all tastes in debating. From one round to the next, one can go from a WUDC Best Speaker who concerns himself with strategy, to a WSDC veteran, who is mostly concerned with public speaking and creating a consistent narrative, to (alas) people who have relatively little experience. Winning each type of adjudicator is a game onto itself.
This different community practices a style of debating different from the WUDC-format, British Parliamentary. The WSDC format has how many speeches of eight minutes, in which speakers speak at a reasonable speed and are not afraid to use humor to persuade. It is the type of public speaking that university debating seems to have left in favor of intense speed and focus on raw analysis. The format, which puts two teams against each other, is less complex than BP. Good WSDC debates are witty, interesting and entertaining. They are debates one genuinely wants to watch. No surprise then, that they usually draw a large local audience of young students.

WSDC has no English as Second Language break or final, but they do have special prizes for EFL and ESL nations and speakers. For the first time in Dutch history, Joris took home the ‘Best English as a Foreign Language Speaker’-award, followed by Roel as the second best speaker.

Just like on the universities circuit, native teams are seeing more heated competition from non-natives than ever before. I am proud that Team Netherlands is still at the forefront of this development. This team was one of the best Dutch teams ever and the level is still growing each year.

We got a tough draw before the tournament. We had to face England and South Africa in the preliminary rounds and all time champion Australia in the octo finals. We lost these three debates by the closest of margins, often giving our opponents their fiercest opposition yet. We defeated the United States, the Philippines, Estonia, Lithuania, Nigeria and Kuwait.
As WSDC 2013 comes to a close, we look towards WSDC 2014 in Thailand. In the last few months, we have experienced unprecedented support from the Dutch debating community. Such support must continue for Team Netherlands to continue to grow. It all starts in Middelburg on the 28th of April, when we start the selection process once again – at the whole new Roosevelt World Schools Academy. In our next octofinal, anything can happen.