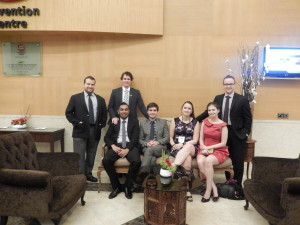 Jonathan Leader Maynard: The ForeignPolicy.com ER (Editor’s Roundtable) podcast is an excellent way to engage with some of the major debates circulating amongst leading commentators in the American Foreign Policy establishment. The podcast naturally works within assumptions and ideological frameworks characteristic of that establishment – frameworks which are open to critique, and not of quite the same alignment as much of the dominant debating paradigm. But this is all the more reason to expose oneself the such discussions, and critically engage with them, and the debates in the podcast are informed, intelligent and touch on many of the critical global issues of our age.

Seb Templeton: I’ve never listened to a podcast in my life lol. I’m an old media sort of guy. Although I started listening to an audio book the other day, so I guess that’s progress! I probably listen to Dire Straits to calm the nerves before a big final but I’m not even a huge music listener before rounds / on the way to venues. I mostly just read :). Whether it’s articles or news magazines to prep for Worlds or casual reading to relax me between rounds. I think it’d be legit for you to out me as a poor adopter of internet-based audio!
Madeline Schultz: For those not quite ready to dive into the world of the Economist, Stratfor and the IHT, triple J’s Hack offers a gentle introduction to current affairs. It’s easy-listening, while still being informative, and while solidly left-leaning, it also goes out of it’s way to find interesting perspectives on issues. As half-hour introductions to topics go, it’s pretty good.
Danique van Koppenhagen: The Financial Times has some easy to follow, short podcasts on economic events around the world, with some foreign policy commentary interwoven to it which are very worthwhile. Serial is great for a deeper understanding of the importance of some elements of justice systems and why they matter, although it is a bit longer. In between rounds I tend to have a playlist that’s a bit calmer during waits and any potential travel to venues, and with a good beat during  the draw / just before the round, to ensure I get fully energized again!