Very often, you hear debaters say that WUDC was nothing like they expected. A once in a lifetime experience. Exhausting, a thrill. Are you preparing for WUDC? Read the below interview with some Dutch Debating Dinosaurs – including WUDC ESL champions, ESL (semi-)finalists and DCA’s for WUDC and EUDC. We asked them what their most important tips and tricks for a successful WUDC participation are, and they started chatting away:

Ali Al Khatib: Putting aside my feeling that at times the new generation of debaters should ignore us old hacks a bit, I think that the most defining aspect of WUDC to me has always been the whimsicality of the adjudication. This often leads to unexpected (in the negative sense of the word) calls. You need to be prepare 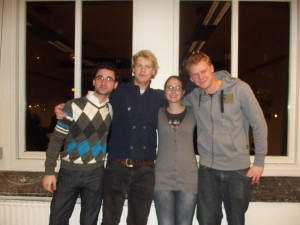 d before attending WUDC that this might happen and not let it put you down when it happens. Potentially – if you are one of the optimists amongst us – you can even see this is an educational aspect: how do other debaters, of other cultures, view a debate. Also, most societies will have members who are more aware of how other circuits judge: Australian judges focus more on rebuttal, British on philosophical / principled argumentation etcetera. Doing your research can help!

Tomas Beerthuis: During the WUDCs I attended, I realised every single time that the tournament is more like a marathon than a sprint. Often you travel far to attend, sometimes across timezones. You have travelled, have to speak 3 rounds in a day with hours of waiting in between, and you are extremely tired as it all comes to a close. But then round 8 and 9 likely decide whether you break – so it is essential to train for the marathon: take your rest during the tournament, practice debating whilst tired and with little prep time, and make sure you always bring some food or drink.

Danique van Koppenhagen: Tomas, I recall that in your case the last was achieved by plundering my food and drink…

Rogier Baart: You need to know where the rooms are. Use your lunch break or the day of briefings to check all halls and buildings, so you don’t lose time during debate prep. Also, when your partner is likely to walk and wander, make sure you know where they are 3 minutes before the draw goes up…

Anne Valkering: Also, asides from the unexpected judging Ali mentioned, it is important to be aware that teams can do things you don’t expect, or speak in unexpected ways. For instance, I often felt like Australian teams just chatted away without proof and that American teams threw out facts without impacting them, but that’s mostly because they use different signalling words than I am used to. You will come across many exciting and surprising lines of argumentation and examples. You shouldn’t assume that these are invalid if you didn’t expect them, or at times struggle to follow people, and you shouldn’t assume judges find these lines surprising or weird either. Even more than at EUDC, you need to be aware that concepts you think are clear might mean something else to others – I recall a story from Reinier where a first prop defined adultery as sex outside of marriage.

Reinier De Adelhart Toorop: I don’t have much to add to the above, apart from the fact that it’s important to agree with your partner what your ambitions are during the tournament. You can have a great time by enjoying the debates and the educational experience, and you can make a lot of international friends. Have a bet with your partner who can kiss most people at the tournament. And try and get as far as you can in the break. But in most cases, you won’t be able to do all of this at the same time. And then it’s useful if you want the same. Best example of this I came across was a team that opposed us during the ESL final Anne and I made. One of them had prepared very diligently for the final and gave a strong speech, the other had partied hard the night before and dropped the ball.

Danique van Koppenhagen: Reinier’s advice probably also extends to a romantic partner that might be at the tournament as well – it’s useful to have similar ideas on whether you spend more time with your speaking partner etc. or whether you share a room as a couple. Lastly, I think it’s important to prepare and discuss what you as a team will do when you face a tough time. What do you do if you only take 2 points on day 2? How do you deal with a loss? How does each of you vent their frustration? For me, putting on some music and ignoring the world for a bit works – but if you have a speaking partner that wants to talk about it, which might clash. Being aware of how you both respond under tiring circumstances is essential. Also, candy. Copious amounts of candy or snacks to get you through the wait and to bribe others into cheering up makes the stress of the WUDC marathon a little better to bear.