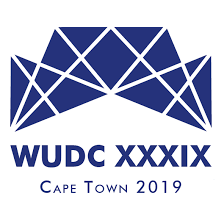 This WUDC took, as said, place in Cape Town. This definitely had some benefits for the tournament, one of them being the relaxed venue and accommodation. All participants stayed at the campus of the Univerisity of Cape Town, which had a lot of green scenery to relax in, as well as an amazing view from the main debate venue over the city. With all the surrounding beauty, it almost was a shame to go inside and debate. The actual rounds of debating started on the 29th of December. People definitely were nervous before the first round was announced, but nevertheless all Dutch people were in for judging and participating in some good debates. The results of the inrounds were mixed, with teams sometimes doing better than expected and sometimes doing worse.

After 9 rounds of debating, all teams and judges definitely had some chances of break night, so on new years eve, we were in for a nervewrecking evening. Luckily there was free Yakka to help us get rid of the nerves, and the break was already announced around 23.00. Eventually, David and Marike broke open and Daan and Linsey broke as judges. A great result for the Dutch Delegation. After a day for recovery on New Years’ day, the outrounds started on January 2nd. David and Marike got through a Partial Double Octo, but unfortunately got kicked out in the Octo finales. Gigi and her partner Tommy from Oxford made it through the Octo’s but got kicked out in Quarters. This meant that there were no Dutch teams participating anymore when it came to the last day of the tournament.

Finals’ day took place in CTICC, a big conference centre in Cape Town. From the high way it already showed that WUDC would take place there and everyone was all dressed up and excited for the finals. Now up until the open final, the whole tournament ran smoothly in the eyes of many particpants, but right before the open final was about to start African participants entered the stage while singing and dancing. They declared that they were done with structural racism in debating and were not going to leave the room until they had gotten apologies from different teams within the organisation. In this article I do not want to go into the discussion these actions caused, or my opinion about this, but I will describe how the event ended because of this.

When the protest was going on, o 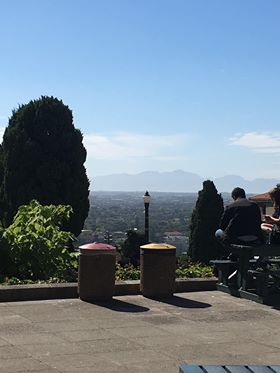 ther participants were led into the dinner hall, where we got food as soon as it became clear that the finale was not going to start soon. In the meanwhile, the protesters were negotiating with the organisation about resolving the issue at hand. This took a couple of hours and a lot of stories and gossip surrounding the event spread. Eventually, the organising committee and tab team apologized to the protesters and the protest ended. During the protest however, the open final, judged by Daan (!), had already taken place.

Given the situation the organisation also felt it was not the best idea to hold a closing ceremony, which meant that everyone just went there own way. Most of the Dutch participants went into the city center to drink cocktails and recover from the evening. Eventually, after midnight, the results of all finals and speaker scores were posted on Facebook. We found out that Gigi had become best ESL-speaker in the world, an amazing achievement! And just as impressive was Marike becoming 7th best speaker in the ESL category. The results of the tournament therefore were great, but to me, the ending in this way felt quite surreal. Nevertheless, we can look back at a good tournament with great results and great achievements from all teams and judges.