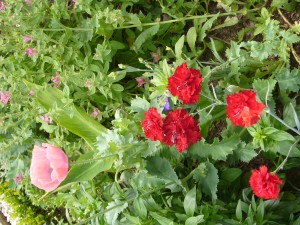 As a society we are obsessed with expressing ourselves, thinking that our happiness depends on our ability to do so. Here’s why I think ‘playing the game of self-expression’ won’t make you happy.

Self expression is closely related to self-construction, and by this I mean the reflexive process of actively picking, choosing and attaching myself to those objects, people and activities which ‘I’ think are desirable and developing a notion and coming to understand ‘myself’ as something tangible and meaningful which is fundamentally tied up with these things. The expressive element of self-construction involves any means whereby you ‘communicate’ something about yourself to the world: It is that process of reflecting on what you like and dislike about the actions, aspirations and opinions of others, and then identifying with or against some of these actions, aspirations and opinions, and finally deciding which of these is identifications is worth ‘shouting about’ – hence expressing yourself.[1]

What I refer to as ‘the game of self-expression’ is widely celebrated in modern Britain. We see its practise in both the public and private realms of the tangible social world, from the high street and the night club, to our living, dining and bedrooms; and we see it in the hyperreal domains of virtual worlds, from the professionally orchestrated world of popular culture to the user-generated world of Facebook. There are many different ‘selves’ out there being expressed and many numerous ways of expressing ‘one’s self’ – but the message is clear, whatever self-identity you choose to construct, and by whatever means you choose to express it – you should express that self loud and clear for others to see.

For many of us, our unconscious ‘vision of happiness’ is of someone actively engaged in an activity that involves them vivaciously ‘expressing themselves’ – Media types singing, dancing and having a jolly good time on the studio set being one archetype, but at a more mundane level this might involve visions of oneself engaging whatever leisure activities reflects one’s own personal preferences –sport, art, dance, holidaying, religion, politics, or a more exciting mixture of any of the above. Conversely, we pity those who are not free to express themselves – Everyone from veiled Muslim women to Mummy’s boys whose identities have been stifled by motherly love; we pity them, because they have been cut off from playing the game of self-expression.

In fact, so integral is ‘the self’ to our notions of happiness, that the very act of ‘constructing myself’ is itself is viewed as something that makes one happy – This could mean shopping for clothes, the hour or more ritual of getting ready to go out, which effectively involves painting a particular ‘image’ on oneself, or it might mean the more ‘day to day’ business of updating one’s Facebook status. So crucial is our success at expressing a social identity to our happiness, that there is even an industry built up around it – of personal shoppers, body language experts and life-coaches and so dominant is the idea that ‘constructing and expressing the self is crucial to happiness, that an inability to ‘successfully express oneself’ is seen as a reason for failure in all sorts of fields of life – most egregiously in pop programmes such as the X factor where one of the criteria fledging stars are judged on is their ability to ‘express their personality’ through their music, while back in the mundane world, some of us may fail in everything from job interviews to first dates because of our inability to express ourselves as someone worth knowing, irrespective (crucially) of who we really are.

The dominance of the ‘discourse of self expression is evident in the incredible array of ‘techniques of self expression’ that is available to us to ‘express ourselves’ – We find its logic in fashion, which has to be the most publically visible and the most obvious example of how we express ourselves – Many of us buy clothes not just for their functionality, but to say something about ourselves – or at the very least to ‘fit in’ with image-trends. Similarly, the houses in which we live are not just vessels to keep us warm and dry – they are vessels in which we store stuff that tells the story of ourselves – many of us live as if someone were going to look ‘through the keyhole’ – dressing up our living rooms, bedrooms, and even our kitchens, with objects that express something about ‘myself’.

I could spend pages listing the vast array of objects that are used to the ends of self expression, suffice to say for now there are many, and to just briefly comment on how far this logic of self expression has penetrated – even into the realms of our personal lives where relationships and family lives themselves have increasingly become about ‘self-expression’ – Consider how much time couples spend clothes shopping, decorating their house, or preparing themselves for evenings out – mutually reflecting on how best to express themselves as a ‘couple’.

It is hard to dispute the centrality of ‘the game of self-expression’ to modern social life, and it is similarly hard to dispute the notion that many of us expend considerable time, money and effort in both constructing and expressing ourselves in the belief that this effort will make us happy. Unfortunately, while our expressive indulgences might well make my believed to be tangible constructed self temporarily happy, in the long term, playing this game is more likely to perpetuate ignorance and misery.