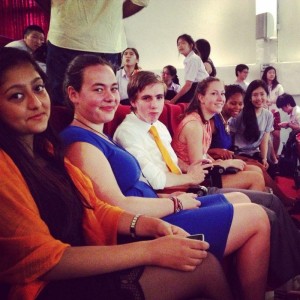 Their journey began on the 28th of April 2013 when during the Roosevelt World Schools Academy the the pre-selection for team Netherlands was made. 15 months later, after training very hard almost every saturday we saw 4 incredibly talented high-school debaters leave for what will be the most challenging and prestigious tournament of the year.  Emma van der Horst (Sint Willibrord Gymnasium), Emma Lucas (Stedelijk Gymnasium Nijmegen), Uche Odikanwa (Rijnlands Lyceum Oegstgeest) and Urmi Pahladsingh (Stedelijk Gymnasium Nijmegen) will represent team Netherlands during the World Schools Debating Championships in Thailand.

After months of preparation, practise debates and writing case files, their last stop before WSDC will be the Asian World Schools debating Championships. AWSDC is an international competition in preparation for WSDC, there are 30 teams attending amongst which 6 WSDC teams. Unlike most other schools competition this competition will only have impromptu motions. The competition will have 8 preliminary rounds with a break to octo-finals.

The Dutch Team did an excellent job during their preliminary rounds.  They won 6 out of their 8 debates and were therefore the 3rd breaking team! The octo-finals will take place tomorrow morning and on behalf of Seventwenty I would like to wish them the best of luck for their future rounds and congratulate them with their performances so far.

Below you will find information on the motions and results so far, I will update this as soon as i have more information.

Rd1: THB in a citizen’s right to bear arms
Rd2: THBT liberal democracies should adopt educational policies at creating a less religious population
Rd3: THW not give prominent entertainment awards to artists who have committed crimes of violence
Rd4: THW give more votes to citizens who regularly donate a substantial proportion of their income to respectable charitable causes
Rd5: THW give a doctors, not parents, the final say over all medical decisions concerning children
Rd6: THW force all advertising to provide only technical product details and require that all products be sold in plain packages
Rd7: THBT living below the poverty line should be the absolute defence to acquisitive crimes
Rd8: THB the LGBT rights movement should abandon the claim that sexuality is not a choice