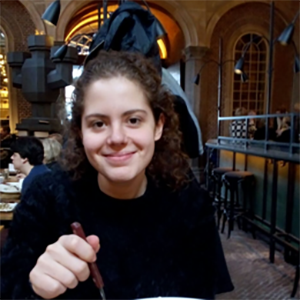 The biggest tournament of the European Debating scene is coming up in just a few weeks: The European Debating Championships. And this year, the Netherlands is not only represented with its speakers and judges, but also on the Chief Adjudication (CA) team. Daan Welling and Gigi Gil will prepare motions that they have thought long and hard about to give you the best, and most fair, debating experience! Time for 720 reporter Huyen to ask Gigi some questions about debating, EUDC and fellow Dutchies.

You yourself have of course often performed superb at various major internationals and thus know what is necessary to break. What is your vision for Dutch debate squad this year at EUDC? Which are the teams to look out for?

Gigi: I think there are scary teams from many of the debating societies. I would be hesitant to name them because I haven’t been around in the Dutch debate competitions for a few months. I’d say definitely I’d be severely surprised if there wouldn’t be at least one non-Leiden team that breaks at Euros this year. I think the key now would be everyone needs to f*cking prep, let people know who they are, go to competitions, meet the judges that you’ll see them at Euros. And if they keep doing that, they should be at least improve their breaking chance.

Based on your experience, what advice would you give to the first-timers to EUDC?

Gigi: You should set goals that have nothing to do with the actual outcomes of the competition. I hear so many people that are out there to win, and the depressing thing about Euros is, only two teams will win. So there’s just no point in trying for that: things get random, people get nervous and stuff. I always set goals that are individual, so Emma and I always talk about things like: We both want to give at least one speech that we are really proud of, that when we sat down and was like “Yes, that’s what we wanted to do”. We want to have at least one round that we were like “Yes, we’ve watched the documentary in prep for this!”. So I’d say set personal goals and don’t tie them on other people.

The other thing I’d say, specifically for speakers, only Day 3 matters. I’ve had this three times at international competitions where my partner and I scored 9 or 10 points on the first two days and then we did break. And there are other situations where everyone in our community after Day 2 was like “Oh you’re definitely gonna break” at this point, and you might not. Everyone gets so nervous, so you are at a disadvantage where you get sucked into the nerves. You definitely need to talk with your partner about what makes and breaks you. But keep your cool, seriously, Day 3 is the only day that matters!

Many debaters experience stress while at EUDC. The competitive environment, the socials, the difficult motions, a new environment and being together with others practically 24/7 can take its toll on our energy levels and mental wellbeing. How did you deal with stress at EUDC?

Gigi: I smoked so much =.= I know some people that are very honest about being stressed, and I tried to be honest to myself about being nervous as well. I think debaters all want to be this person who does very well but doesn’t get nervous at all. Everyone gets nervous, everyone! There’s no one who gets excluded from this. Emma and I talked to one another about who we are going to talk to about this, I didn’t want to give her the feeling that I was telling everyone. So I’d talk to this one person, she’d talk to a different person, as long as you’re really honest about what you are doing. Same for like, deciding whether or not you are going to backtab or whether or not you’re probably gonna tell each other you’re probably lost, that really helps. Whatever you decide, deciding it together is the thing that matters. The bigger thing is, you will get nervous, and it’s really important to know that, everyone gets nervous.

Do you recommend going hard at the socials in Euros?

Gigi: To be honest, Emma and I had the most fun at the social right after we went out, when there was no pressure. Other people were so nervous, sometimes it’s like “Woo, there’s no responsibility”, you get to enjoy everything. I don’t think the last few years I’d ever really partied hard at any socials during Euros. I would always go and have a drink, I think we underestimate how much you can do just by sleeping, you need to relax after a day of intensity at Euros. So I usually would go, but never stay for really long, because then I’d get too psyched down and then like “I need sleep now!”

In order to qualify as DCA for EUDC you of course have to have lots of experience with speaking and judging. And you have CA’ed many many tournaments around the globe in preparation for EUDC. What was the most fun judging experience you had so far?

Gigi: I have many! One that was relatively recent is the Shanghai International Debate Open (SIDO) where I judged, it was so much fun! It’s so cool to see such a huge circuit in a continent I’ve never been to, how nice and welcoming everyone was, and how really amazing the teams were even though I’ve never heard or met them before. That was really fun and chilled! But generally, I genuinely enjoy judging outside the Netherlands. At some point, you just know everyone from your own circuit, but there’s like the exact version of you in any different countries, and you met a lot of people who are really nice that you could potentially hang out with. Especially when I wasn’t as experienced yet, because then I got to judge with people that were so good, and they taught me so much, and when I’d see debates I’d never got to speak with such speakers. I always encourage people to go judge before you get too good in speaking, because you won’t enjoy as much. It’s so much fun when you still had the shock and awe experience of seeing someone speaking an 84 and then losing a debate.

Across all CA-teams that you have served on, what is the best motion have you set so far?

Who is you favorite CA member? State your reason in three words.

Gigi: Oh that’s really difficult, I’m not sure I know! So I’d say this, I recently CA-ed for the first time with Ilja, and he is just, downright excellent human being. I’ll say, my three words are: HE WILL WORK. Like, he will work until it is perfect, and that’s what I really appreciated.

Gigi: That’s a really good question. Recently, quite some people have been asking me this question, seeing that the Netherlands has had an influx of new competitions in the last few years. That’s amazing, but also I’m not sure if it’s working the exact way we wanted it to: competitions all of them tend to be a bit smaller than they used to be. That’s an interesting change: debaters are way more active, but there are not that many debaters who are willing to be active. My more favorable change is, two to three years ago, there was a huge vacuum of established people dropping out across all of different debate societies. And now, it’s changed in a way that there are good debaters in almost every separate institutions in the Netherlands. That means the more competitive debate get-togethers aren’t happening at one society in one evening, but we all meet at debate competitions where we all meet. I hope that keeps continuing, and that people keep going to international competitions with their own delegations. Meeting each other in top rooms, achieving Dutch success!

Which one is your favorite debate club in the Netherlands? State your reason in three words.

Gigi: Ouch… that’s edgy! I’d say…. Cicero, and the three words are: THEY HAVE RISEN. What happened to them in the last few years is just really impressive! They have a nice culture of being super inclusive, but also allowing people to be really competitive. I think they are really good example of how you can become really good as a debating society without being overly harsh or overly competitive. So I’d say Cicero definitely takes the crown for this one.