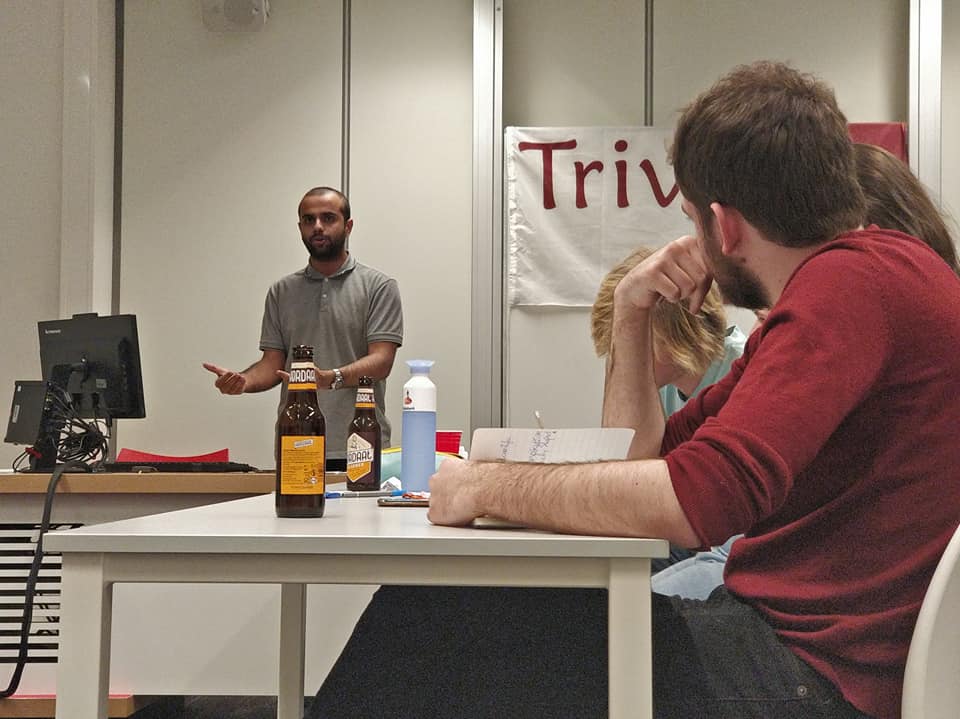 It started with a train journey to the far Nijmegen. I had to leave in the middle of class to catch a train at 15:50 so that I could also have some dinner after arriving in Nijmegen. Luckily, I don’t mind traveling that much as long as I have something to do. Well, there was a problem with some code in the class of that day that I had to look at and I had a book with me, so all was good. If all was lost, I could always do some casefiling (apparently good debaters do that or something like that). For example, one can find out that Putin and Maduro have been good friends. Apparently, they have been secretly playing in an 80s Soviet band together, with Putin taking on the glamorous lead vocals and Maduro bouncing up and down behind the keyboard. You can read all about it in this very reliable source:

Now, on to the DDL. Very quickly for those of you that are unfamiliar with the concept, the DDL pits eight debating societies (namely Bonaparte, Cicero, Delft, EDS, GDS, LDU, Trivium, and UDS) in the Netherlands against each other in 16 debating rounds spread over eight evenings. These eight evenings are each hosted by the eight societies. Simple arithmetic then shows that each evening consists of two debating rounds. At the end of the season, the society with the most points claims the cup for the year and can call themselves the best society of the Netherlands for a year.

This edition, Chronos (the debating society from Eindhoven) replaced GDS due to GDS, unfortunately, has been unable to send teams this season and it seemed fair to then allow Chronos as a replacement. Currently, the Debatbond is looking into the possibility to let Chronos enter the DDL in lieu of GDS permanently. Despite this being very sad for our friends from Kalliope, it did mean that we could meet with two members of Chronos: Leon and Inaki. Coincidentally, I actually met up with them at the train station after already having met up with Noémie and Alex from Cicero, my other lovely society. It turns out that Inaki is actually from Gran Canaria, one of my favourite holiday destinations. Anyway, let us talk about the actual debating that took place this evening. 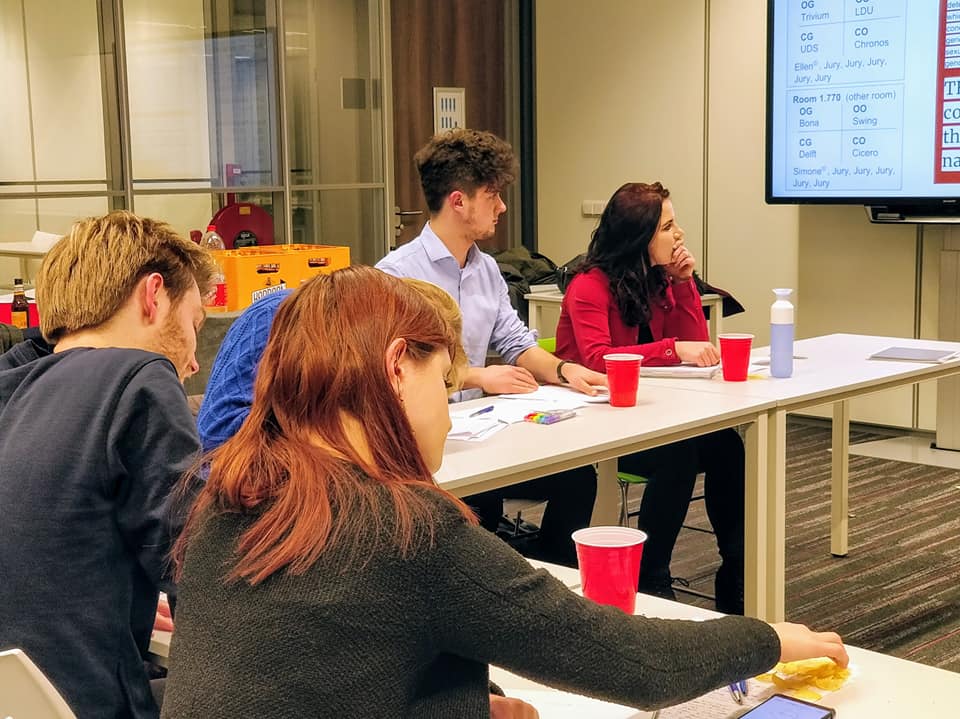 It turns out that my casefiling actually paid off, since the first motion actually concerned Venezuela. Honestly, this was pure coincidence since I genuinely wrote the introduction of this article during the travel towards Nijmegen and it kind of made me laugh. The motion read:

Now, I am a mess on IR motions but this one actually went well. Me and my team partner Roel were Closing Opposition versus Cicero (Noémie and Alex) in OG, Trivium (Mara and Thomas) in OO, and UDS (Daan and Harmen) in CG. All kinds of different aspects were considered by the debaters. Of course, as one would, even China and Russia were brought into the debate. CG discussed how building enclaves would be part of the plan as well and how that can provide security for people in Venezuela. We tried to do something else. We explained how the people in Venezuela genuinely have an anti-Western thought process due to the prevalence of Hugo Chavèz in the past and his spiritual successor in Maduro, which consequently allowed us to explain how tensions grew and what other nasty effects are of interfering (actively) in Venezuela. In the end, we took a first, with Cicero taking a second, UDS taking a third, and Trivium taking the fourth place.
Quickly after this, we needed to assemble in the announcement room again for thesecond round was about to start. Luckily, Trivium (the hosting society) anticipated well that people would be exhausted and, as such, they made sure that there were snacks and drinks for us all to enjoy in the tiny break and during the debate. The motion for the second round read:

This house, as the LGBTQIA+ community, regrets the “born this way” narrative.

An infoslide accompanied this motion to explain what this narrative entails and what possible alternatives would be. The draw was quite similar, with only Cicero and Chronos swapping rooms. We were Opening Opposition versus Trivium in OG, UDS in CG (once again), and Chronos in CO. We tried to run a case about acceptance and coming out, after sketching what the LGBTQIA+ community should care for most, being (in our eyes) those people that feel least safe around their identity and who need the help of the community most. As you might know, conversion therapy is sadly rampant as a mechanism to try to make people step away from their sexuality. As horrible as this is, we believed this to increase under proposition’s side. At the end of the debate, the call was that we took a first, Chronos took a second, UDS took a third, and Trivium took a fourth. That means that the ranking of the DDL is now as follows:

That was the end of the evening. I loved coming to Nijmegen and seeing some familiar but also new faces. I would recommend everyone to attend at least one DDL meeting, be it as a judge, speaker, or supporter! I vividly remember Bonaparte bringing supporters last year that even made up songs and yells to support their team. That is what I call dedication. I hope that you will be able to attend the next DDL, which will be on March 18 in the beautiful city of Rotterdam! 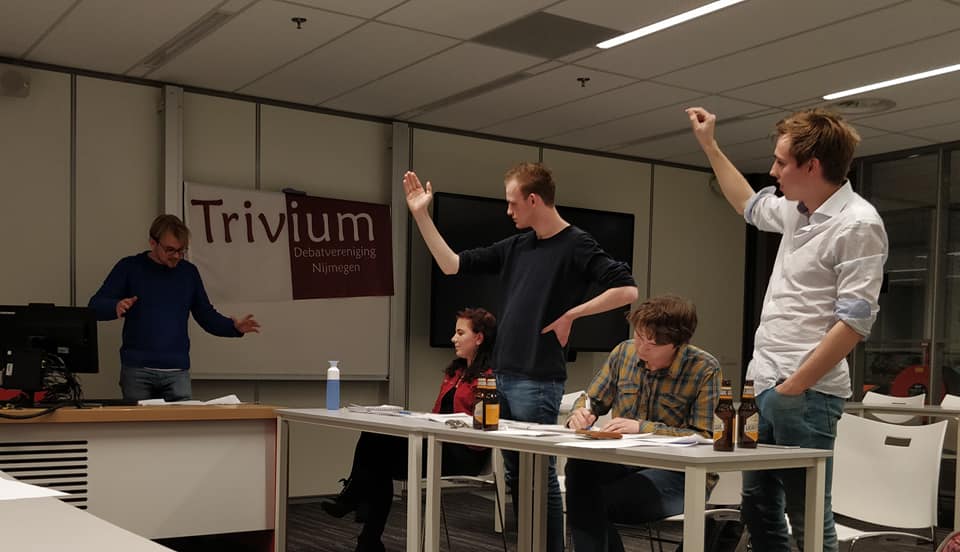